This article, originally posted in the Washington Jewish Week, describes the work of one rabbi involved with Reshet Ramah, the national alumni outreach program for the Ramah movement’s camper and staff alumni. Reshet Ramah aims to build connections among Ramah alumni by offering local activities and programs inspired by the Ramah camp experience that will be appealing to them today. The Sukkot program discussed in the article was a Reshet Ramah Learning Hub event. The previous evening, 50 Reshet Ramah participants gathered at a Sukkot happy hour in a DC suburb, while another 20 gathered in a parallel happy hour in downtown DC. Reshet Ramah is co-funded by AVI CHAI and the Maimonides Fund.

Cross-posted from the Washington Jewish Week.
No name, no website, focus on relationships
Conservative movement aims at millennials
As 10 young adults sit in a backyard sukkah in Bethesda, noshing on kosher sushi, Rabbi Rami Schwartzer holds up a lulav, and talks about the meaning of the Sukkot holiday symbol, with its foliage from date, myrtle and willow trees.
At the same time, Schwartzer, 28, was also deconstructing a matter of perennial Jewish consideration — the challenge of keeping young adults involved in the Jewish community. The 2013 Pew survey “A Portrait of Jewish Americans” found that only 24 percent of Jews ages 18 to 29 are members of a synagogue.
That’s why this gathering is at Schwartzer’s home, not a synagogue. Since September, Schwartzer, a Conservative rabbi, has been trying out what could be a new model for how the movement can reach Jewish millennials: Invite them to his home with his wife, Adina Rosen, and host events with the aim of building a Jewish community that isn’t branded or institutional.
“My wife and I open our home for Shabbat every week for a dozen people, we’re doing community service and we’re studying Torah. What we’re doing is Judaism,” said Schwartzer, who is also director of the local Ramah Day Camp, which is affiliated with the Conservative movement.
“There’s a lot of tremendous programs happening in this city [for young Jewish adults],” he said. “What I’ve heard from a lot of people is whether you’re single or in a couple or in a family, it’s hard to feel like you have a real intimate connection with someone. And so my wife and I focus on that intimacy.”
“Schwartzer is concentrating on one-on-one relations,” said Rabbi Bill Rudolph, co-founder and president of what he calls the “millennial project,” who hired Schwartzer.
Registered as a 501c3 nonprofit, it has raised $150,000 and has institutional backing from 12 local Conservative congregations, Camp Ramah, the Jewish Federation of Greater Washington and a handful of family foundations. Schwartzer said he is resisting conventional branding; his initiative doesn’t yet have a name or a website. Schwartzer’s home is next to Congregation Beth El of Montgomery County, in Bethesda, but he isn’t on staff of that synagogue or any other.
Still, Schwartzer is thinking strategically and tracking his progress — he said that in just two months, 142 different people have attended his events, and he has had 496 different “touchpoints,” such as exchanging emails or getting coffee with someone.
Schwartzer said that since he doesn’t have the responsibilities of a pulpit rabbi, he is able to focus all of his time on relationships. “I consider myself a community organizer,” he said.
“Conservative rabbis are trying to figure out how to strengthen our movement,” said Rudolph, rabbi emeritus at Congregation Beth El. “Rami’s teaching will have our brand, but no one is going to have to sign a loyalty oath to the Conservative movement to participate.”
Rudolph said Schwartzer is practicing “classic outreach: meeting people where they are, physically and spiritually. It’s a non-Chabad Chabad,” he said, referring to the successful haredi Orthodox outreach movement.
One participant in Schwartzer’s Sukkot event last week, Matt Adler, 30, of Bethesda, said he heard about the project through word of mouth; he does Israeli dancing with one of Schwartzer’s friends. 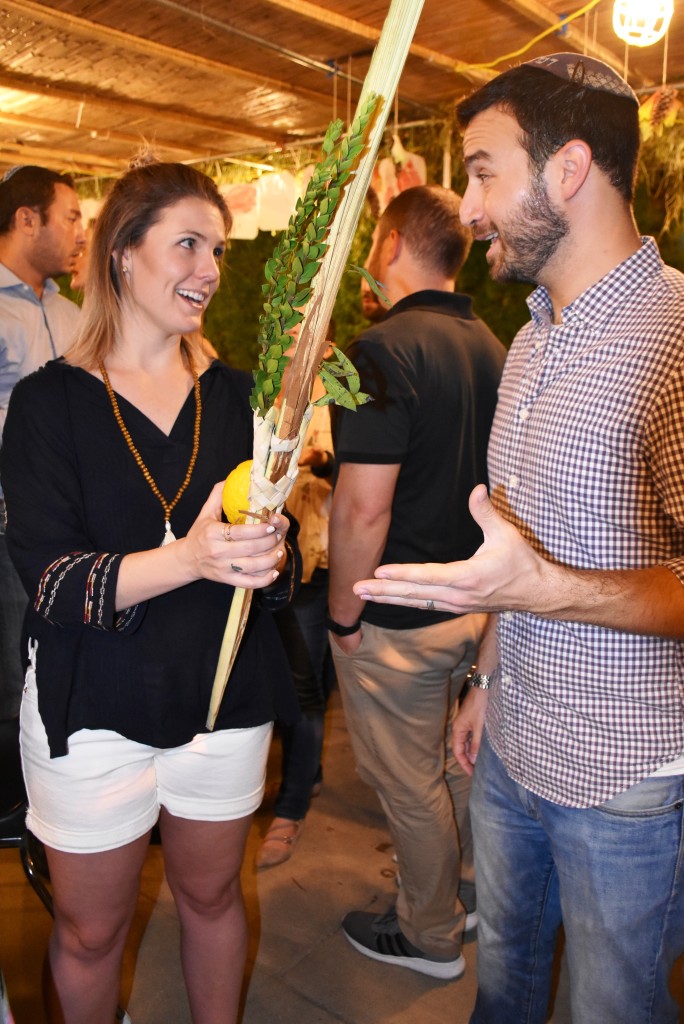 “I think the advantage for this group is that since it’s not tied to a synagogue, you really get people ranging from unaffiliated to Reform to Conservative or any post-denominational background,” Adler said. “In many ways this could be the future of Judaism.”
Statistics support Adler’s sentiments about the intermingling of denominations. The 2013 Pew Survey found that four out of every 10 Jewish adults under age 30 have no denominational affiliation, and one third of Jews in their 30s and 40s don’t identify as part of a denomination. By contrast, only about a quarter of Jews 50 and older say they have no denominational attachment.
Schwartzer said that young adults are looking for Jewish connections outside of synagogues.
“[Young Jewish adults] are looking to connect, they’re looking to live the Jewish calendar, they’re looking to do community service and they’re looking to learn, but not necessarily in the building and structure of a synagogue with a membership and all those things,” he said.
Schwartzer added that the time between when people typically finish college and have children is growing, and this means Jewish programming must evolve.
“When you have preschool-aged children, that preschool becomes your community,” he said. “But until that point there is nothing really building those deep connections and community.”
Ultimately, Schwartzer believes that young adults need Jewish community as much as the community needs them.
“This is a time of life when you have real pastoral and spiritual issues and it’s a time of life with great seeking and yearning and a need for community,” he said. “I see myself as a connector.”
WordPress Video Lightbox